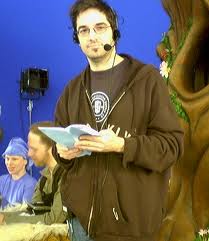 Timothy Lagasse is a puppeteer, puppet designer, and filmmaker. He earned his BFA from the University of Connecticut. Lagasse acts as a puppeteering consultant, and creates puppet films for stations like PBS, MTV, HBO, and Nickelodeon. In addition to his performance credits, Tim also teaches the art of puppetry, lecturing at the Lincoln Center Foundation and instructing students on modern television puppet techniques at the Puppet Arts Program at the University of Connecticut.

To view the gallery for Tim Lagasse, please click here.

Retrieved from "https://crashbernstein.fandom.com/wiki/Tim_Lagasse?oldid=8783"
Community content is available under CC-BY-SA unless otherwise noted.